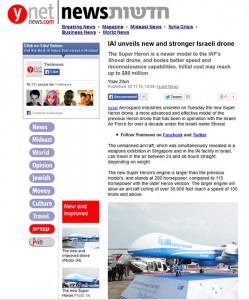 IAI’s new Super Heron Heavy Fuel (HF) UAV is being proposed for a Swiss heavy fuel MALE UAV requirement that is in the final stages before a downselect, industry sources have revealed.
The enhanced heavy fuel version of the Heron 1 was launched during the Singapore Airshow, and was designed for a Swiss competition that has been underway for some two and a half years.
The final two contenders for the tender – which sources reveal will see a contract awarded ‘in the coming weeks’ – is IAI with its Super Heron and Elbit with a heavy fuel variant of its Hermes 900, although IAI could not comment on any potential customers for the new platform or any details on the increased payload capacity.
Under Missile Technology Control Regime regulations, the weight of the payload and fuel for a UAV cannot exceed 500kg at a range of 350km, so the Swiss requirement has a payload/fuel limitation of 450kg, which the Hermes 900   falls under.
In 2005 IAI bid a heavy fuel version of the Heron for the US Army’s Extended-Range Multi-Purpose programme that eventually became the Sky Warrior/Gray Eagle programme, although IAI could not comment on the similarities in the systems.
Elbit has used a Centurion engine in its offering, while Dieseljets is believed to be the engine in the Super Heron.

‘This is based on the Heron 1 and we are introducing a new propulsion system,’ an IAI spokesperson told Shephard. ‘There is a substantial increase in power and a significant improvement in the velocity and rate of flight.’
Although he could not talk about potential customers, the spokesperson said that there is a growing international demand for heavy fuel engines.
The Super Heron has a wider and longer fuselage so as to carry a heavier payload, while additional winglets decreases drag.
The spokesperson said the company has been working on it for ‘several years’, and it was been test flown by the company ‘a few months ago’.
‘We’ve already flown it and it has completed flight testing, and now we are ready to sell it,’ he continued.