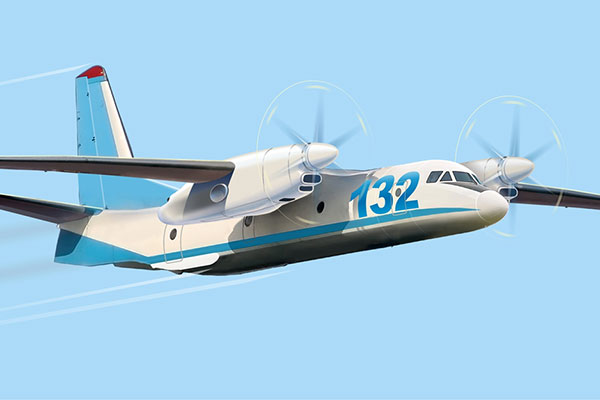 AN-132 is a new light, multi-purpose transport aircraft to be jointly developed by Antonov and Taqnia Aeronautics Company. The aircraft will be based on Antonov An-32 (NATO reporting name: Cline) twin-engine turboprop.

The light transport aircraft is primarily intended to transport cargoes weighting up to 9.2t, while its secondary roles will include aerial delivery of cargoes on parachute platforms, airdropping of paratroopers, medical evacuation, reconnaissance, maritime surveillance, and other military and civilian missions.

Antonov presented its AN-132 project at SITDEF 2015, one of the biggest exhibitions of Latin America, in May 2015. It estimates the market demand for the aircraft to be 900 units, and expected to begin production in 2017.

A contract signed by KACST and Antonov in April 2015 marked the beginning of the AN-132 development programme. The An-32 platform was preferred after studying the requirements of Saudi Arabia and the global market for light transport aircraft in the military and civil sectors.

Taqnia Aeronautics Company, a subsidiary of Saudi Company for Technological Development and Investment (TAQNIA), signed an agreement with Antonov in May 2015 to develop and manufacture the AN-132 light cargo planes in Saudi Arabia.

Under the agreement, King Abdulaziz City for Science and Technology (KACST), Taqnia Aeronautics Company and Antonov will redevelop the existing an-32 aircraft to produce a new variant with improved payload and range characteristics. The agreement will also enable transfer of the technology to Saudi Arabia.

The programme will also encompass the development of a new cockpit with state-of-the-art US-made navigation systems, which will allow the crew to efficiently operate the aircraft in adverse conditions. Additionally, new equipment and systems will be integrated into the aircraft to significantly enhance its capabilities. The intellectual property rights and the inventions for the aircraft will also be owned by Saudi Arabia.

In June 2015, Antonov signed a participation agreement for the design and construction of an aviation plant in Saudi Arabia. The plant is to be furnished with modern equipment, allowing the implementation of new aviation technologies in the aircraft production.

AN-132 light airlifter will be the first aircraft to be built at the new aviation complex under the finalised arrangements.

AN-132 design and features

The AN-132 will retain the best characteristics of AN-32 including high thrust-to-weight ratio for operations in hot and high conditions. It will also offer reliability and flexibility to operators.

“The light transport aircraft is primarily intended to transport cargoes weighting up to 9.2t”

The transport plane will integrate in-built cargo handling equipment for loading / off-loading of payloads, while an auxiliary power unit aboard the aircraft will allow autonomous operations when operating at poorly-equipped airfields.

AN-132 will have the capability to land on unprepared runways where other transport aircraft fail to operate. It will be used for the transportation of troops and light vehicles in standard configuration, but can be configured for airdropping of paratroopers or cargo and MEDEVAC roles.

The AN-132 will be equipped with an advanced glass cockpit accommodating two crew members. This cockpit will integrate navigation systems from Honeywell and systems and equipment aboard the aircraft will meet all the modern standards.

The new Saudi-Ukrainian aircraft will be powered by two turboprop engines supplied by Pratt & Whitney Canada. Each engine will drive a Hamilton Sundstrand propeller. The power-plant will offer AN-132 an extended range compared to An-32. 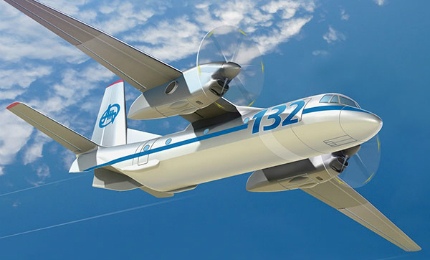